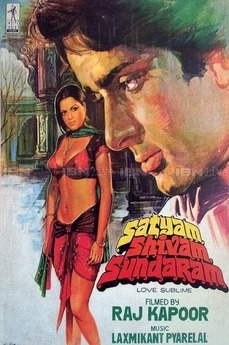 In Satyam Shivam Sundaram, director Raj Kapoor cast his younger brother Shashi Kapoor as Rajeev, an engineer obsessed with perfection, who comes to build a dam in a small rural town. He falls for Roopa, a beautiful, voluptuous young woman in extremely skimpy clothes who always hides one side of her face from him. It is only on their wedding night that he discovers that half her face was burned in an accident as a child. he rejects her, and instead starts an affair with a mysterious other woman who always keeps her face veiled and is, of course, his wife in disguise. When his wife becomes pregnant, he freaks out and accuses her of cheating on him, only realizing that he truly loves her when the dam he built breaks, and he has to save her.