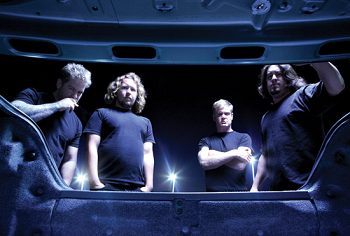 The typical Pig Destroyer experience.
Influences:
A six year old girl dances on my ceiling
She might as well be dancing on my grave.
— "Gravedancer"
Advertisement:

Pig Destroyer is a Grindcore band from Richmond, Virginia. Their albums are the absolute definition of Nightmare Fuel. Their lyrics can range from politically charged to emotional rants, all wrapped up in the histrionics of sheer, absolute madness and terror. They're known for their short, quick-tempo songs (trademark of the genre) occasionally broken up by longer, doom-spelling verses, and the albums are often littered with stories of absolutely vomit-inducing imagery.

The band gets its name from the pejorative term for police (pig) and... well, destroying; however, the band says that their name no longer really means anything.