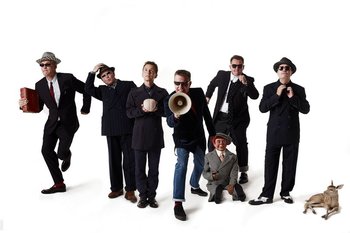 Still nutty after all these years.
"You can make it your own hell or heaven
Live as you please
Can we make it, if we all live together
As one big family"
—"We Are London"
Advertisement:

A British band which originated as the North London Invaders in 1976, Madness started off as one of the premier bands of the 2 Tone ska revival and eventually became one of the most successful pop groups in the 1980s, spending 214 weeks in the singles charts. The group has been active for much of the past thirty years. The best-known line-up consists of Graham McPherson, aka Suggs (vocals), Mike Barson (keyboards), Chris Foreman (guitar), Lee Thompson (saxophones), Daniel Woodgate (drums), Mark Bedford (bass) and Carl Smyth, aka Chas Smash (vocals, trumpet and acoustic guitar).

Noted for their energetic and 'wacky' style of playing and performing (especially in their earlier music videos), which earned them the moniker of 'The Nutty Boys'. Their music mainly consists of ska and reggae mixed with Beatlesesque, Kinksy pop. Their lyrics often featured humorous observations on growing up in London in a style influenced by Ian Dury. In 2009 they released the critically acclaimed album The Liberty of Norton Folgate, their first new material in ten years which incorporates all of their main influences into something Suggs describes as 'progressive pop'.

Also of mention is The Madness, a spin-off of the group which only featured Suggs, Smyth, Foreman and Thompson. They were active between 1988 and 1989, after the original line-up broke up (the group as a whole reformed in 1992), and released a self-titled album.

Some of their better-known songs include:

Example of:
Spoken Word in Music