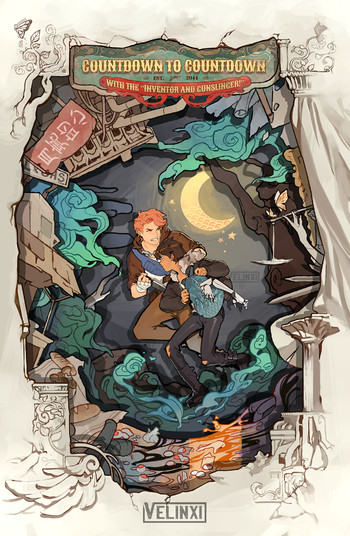 ”Iris is a young man with the gift to bring pieces of artwork to life. 5 years into an apocalyptic outbreak, he’s holed up in a lab that shelters 'problem' children. Between his failed experiments, deteriorating mental stability, and being ridiculed by other members of the lab, he doesn’t think life could get any worse. Life agrees to disagree.”
— comic description
Advertisement:

is a sci-fi, post-apocalyptic webcomic by Xiao Kong "velinxi" Tong. As of April 2019

, the original run that started in 2015 met a premature end due to the author's dissatisfaction with the comic and was rebooted entirely. The original run can be found under the Legacy tab

The current run of Countdown to Countdown follows Iris Black, a denizen of the Seattle Lab, a special facility where humans with superpowers called Demifloras can live in peace and safety. In the outside world, people called Spawncampers hunt Demiflora and mutilate them, stealing the body parts tied to their powers to be sold on the black market. Inside, thanks to the efforts of the facility's leader, Madam, everyone lives in peace and safety, but use of your powers is forbidden.

Iris is Madam's son, and doesn't agree with the strict rules his mother imposes on the citizens. He freely uses his powers as an Iris, a demiflora able to create tools and machines that he draws, much to his peers chagrin. His life changes forever when he runs into a Demiflora from the outside, Lillium, who reveals his mother's dark secret to him.