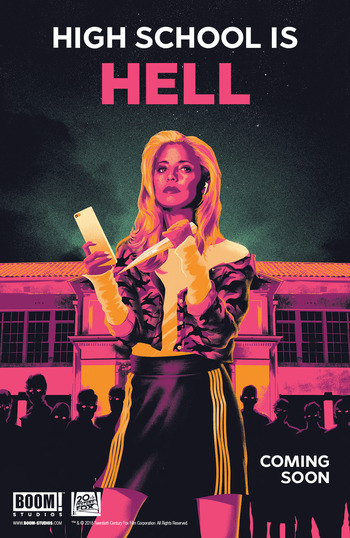 In 2007, the cult TV show Buffy the Vampire Slayer was resurrected in comic form by Dark Horse Comics, continuing in season form and serving as official canon to the series. After ten years and four seasons, the Buffy comics came to an end, and Boom! Studios bought the license.

Rather than continue the story as Dark Horse did, Boom! is doing what it did to Mighty Morphin Power Rangers; rebooting Buffy and updating it for The New '10s. The series follows Buffy in her early days as Sunnydale High, fighting evil alongside the Scooby Gang.

Like with the later Buffy Season comics, it has an accompanying Angel series (which from issue #9 and onward was renamed Angel & Spike), which ran from 2019 to 2020.

Two standalone books "Chosen Ones" and "Every Generation" have been released detailing stories of previous Slayers, and one alternate universe Buffy.