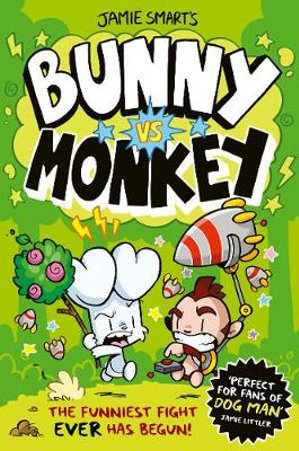 Bunny Vs. Monkey is a children's Comic Book by Jamie Smart.

One day, scientists launched a chimpanzee into space. The journey was long and arduous for the chimp, but eventually, he landed on a planet which he would claim for Earth...

Yeah, he landed in a forest on Earth, and decided to make himself its new ruler, not knowing (or maybe not caring) that he's not on another planet. Anyway, the local animals find themselves having to deal with the monkey's shenanigans. Luckily, one of them, a rabbit, is willing to stand up against the monkey's mischief.

Bunny Vs. Monkey contains examples of: