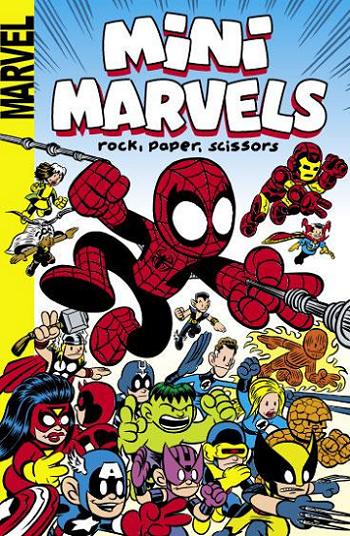 Notice how Daredevil is facing the opposite direction.
Advertisement:

Mini Marvels is a Self-Parody of the Marvel Universe created by Chris Giarrusso, a universe that deliberately pokes fun at the Crapsack World aspect of the latter. Much fun.

How much? Well, it comes off as a Fun Personified universe compared to the mainstream M.U.. The kicker is, all the superheroes are Peanuts-esque kids, Secret Identity is not a problem whatsoever, and most surprisingly, The Good Guys Always Win.

In particular, their versions of most Crisis Crossovers always end up as self-parodies, like Civil Wards, which pokes fun at the un-needed Conflict Ball present in the Civil War.

There are many other memorable moments, such as when Harry Osborn saves Gwen Stacy, thus making this incarnation of the character one of the few ones still alive.note She lives on in Spider-Man: The Animated Series, The Spectacular Spider-Man, Spider-Man Loves Mary Jane, and Spider-Gwen

This series and its setting started as a series of strips by Giarrusso, called "Bullpen Bits", relying more heavily on the Peanuts aspect, but when it evolved into Mini Marvels, the series' source of inspiration was ultimately dropped.