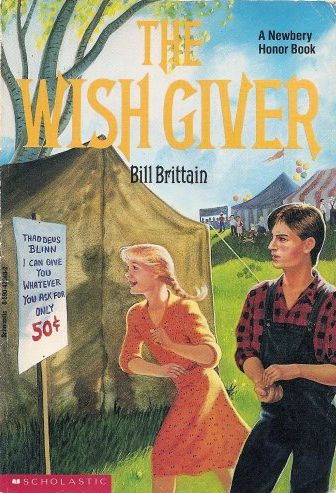 The Wish Giver: Three Tales Of Coven Tree is a children's novel by Bill Brittain about four children who receive wish-granting cards from a mysterious vendor at the county fair. Three of the children make badly-worded wishes with unfortunate consequences, and Hilarity Ensues:
Advertisement:

Polly, a sharp-tongued girl with very few friends, wishes to be popular. After the wish she can no longer say mean things or insult people, she croaks like a bullfrog instead. She becomes "popular", but only because the other schoolchildren are amused by her croaking. She realizes that if she was nicer, she would have more friends.

Rowena has a crush on a traveling salesman, Henry Piper, who she only gets to see for three days at a time. She wishes that he would "set down roots" and never leave the town again, causing him to turn into a tree. During his ordeal he reveals that he never liked her and only pretended to in order get her family to buy from him.

Adam is from a poor family who cannot afford running water, so they have to get it from a distant source. He wishes for the farm to have water, and soon after the farm is flooded, temporarily forcing his family off the land.

The town shopkeeper, "Stew Meat", narrates the story. The book ends with the prudent narrator using his wish to set things back to normal.

Despite the Reset Button Ending, each of the children learns something from their mistakes and are left better off.

The book received the Newbery Honor in 1984. The obvious moral of the story is to Be Careful What You Wish For.