Recap / Big Finish Doctor Who 059 The Roof Of The World 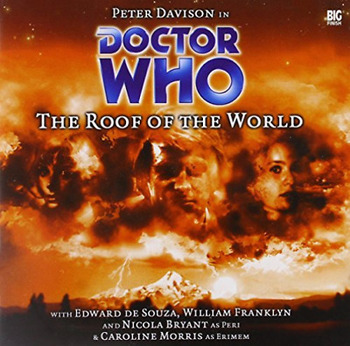 The Fifth Doctor takes Peri and Erimem to Tibet, for an Edwardian cricket match with some brave British explorers. While Peri and Erimem mock him extensively for just how English he can be, the cricket match is interrupted by a giant black cloud, which first hypnotises Erimem and subsequently drags her far away. A voice, an old and equally English gentleman, taunts her and makes her doubt everything she holds dear. Her friendship with Peri and the Doctor, her happy childhood, and whether or not she's even welcome in the TARDIS. It also makes her think she's dead, showing her her own funeral and the Doctor's heartfelt eulogy. By imitating the voices of Peri, the Doctor and Amenhotep II, the creature tries to convince Erimem that she's seen as worthless by everyone, that she's got nothing left, and that her only option now — in limbo — is to either trust him or suffer eternal hell. He reveals that Amenhotep II, before his death, planned to had Erimem thrown to the lepers rather than to suffer his daughter to become Pharaoh.

While Erimem is being thoroughly broken, the Doctor and Peri organise a search party for her, together with the expedition's leader (who's a pompous ass on the outside and a sweet, insecure man deep down) and the journalist (who just wants to get home to his wife and kids and write some proper news). The mysterious voice does a passing imitation of the Doctor and tries to convince Peri to give up the search before it's even started, but is quickly caught when the actual Doctor walks in, miffed at being impersonated.

As it turns out, the "roof of the world" is not only more than it seems, but has actually been hollowed out as a perfect ice tomb for an ancient Eldritch Abomination. Amenhotep II, who had a fondness for astronomy and ancient lore, had stumbled on the creature during his research and decided to have it permanently entombed in the mirrored ice of Tibet, to force it into solitude with its own reflection forever. But young Erimem mistook the creature's papyrus scrolls for toys, accidentally read the ancient chants when she was a child, and became extremely vulnerable to the creature's influence because of it. The creature plans to use her as a herald to bring itself back into the world — which her father realised, and which is why he planned to had her thrown to the lepers. Peri and the explorers save the day by pouring liquid nitrogen on the thing and bombing the cave's entrance.

Adrian Rigelsford was to have written The Dark Dimension, the briefly-proposed thirtieth anniversary film in 1993. He was also the only Doctor Who writer to have a story released while serving prison time