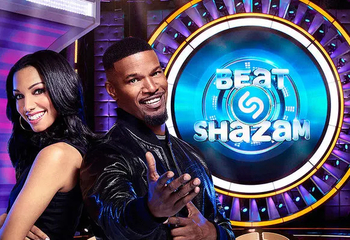 FOX's take on Name That Tune for The New '10s (not that this stopped them from reviving Tune anyway), hosted by Jamie Foxx and cross-promoted with a popular music-identification application. Three couples are played a song, and are asked to guess the song's title among four options. Whoever answers correctly the fastest gets the money for that song; the game is divided into five rounds of five songs each, with each round having a different category and increasing dollar amounts for each correct answer (plus, the last song in each category is always worth double, and one round has a celebrity guest that the category will inevitably relate to).

The lowest-scoring team is eliminated after round 3, while the second-place team after round 5 gets to keep half of their score. Meanwhile, the winning team goes to a bonus round offering up to $1 million.

The series premiered on FOX's summer lineup in 2017, paired up with their reboot of Love Connection; both programs were renewed for a second season. Season 2 mixed things up by changing Round 1 to have no categories ("Shazam Shuffle"), while the second round now has the teams vote for which of two categories to play, and the third round focuses on songs from one particular group or artist. The third season added another new element, in which in the round before the bonus round, the teams must try to guess songs based on instrumental recordings.