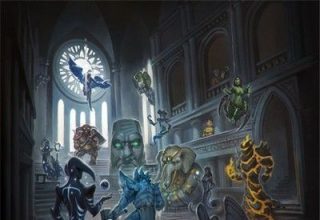 Siralim is a Role-Playing Game developed and published by Thylacine Studios. The king of the kingdom of Siralim has recently passed away. You are his successor, and as newly-crowned monarch, your goal isn't merely to sit on your throne looking regal, but to use your skills as a mage to summon creatures and gather resources in other worlds to build up your lands. Without even time to dry your tears, the people of Siralim look to you to take up his mantle and forge your kingdom ahead into the future.

Gameplay unfolds into something of a a mixture of the monster taming and training of Pokémon, the turn-based Role-Playing Game combat of Dragon Quest, and the Dungeon Crawling of Rogue, with trace elements of other genres to create something that doesn't quite fit solidly into any one genre. Starting with a single monster and a handful of supplies, teleport into all manner of alien realms, scouring it for resources to grow your castle and more monsters to use as recruits in your kingdom's army. (Or just your party, as it were.) Each new realm you enter is procedurally generated and has a particular theme such as dungeon or Fluffy Cloud Heaven, all with their own set pieces, treasures, hazards, and gimmicks.

Combat plays out in turn-based fashion which wouldn't be particularly noteworthy were it not for the unpredictability and variety of enemy encounters. Spamming the attack command will work for a while, but it's more likely to get you killed once a larger variety of monsters with their own equipment, spells, and abilities start to appear. Here the meat and potatoes of Siralim's combat system will shine as each of the over 250 monsters has different abilities and passive skills. Identifying threats on the fly and responding to them becomes a necessary skill as some combos can lead into a brutal Curb-Stomp Battle for your team unless you respond properly. Likewise, the tables can be easily turned on your enemies with party lineups that can combo into each other such as one creature landing a killing blow, powering up and healing from it, another ally causing the corpse of the freshly slain enemy to explode and damage all others, a Mighty Glacier to effortlessly absorb all attacks leveled against it, a fourth party member automatically damaging any foe of a certain element class to heal your party instead of hurting it, a fifth dedicated to causing obscene amounts of damage, then gaining extra turns more times than not, and finally a backup that revives a friendly when it attacks. If that isn't enough, your character still has an arsenal of spells at his or her disposal to level the playing field with. The sheer Combinatorial Explosion when it comes to party building and equipping provides a great deal of replayability. Good thing there's no hard end state or level cap.

Oh, and that's not mentioning building up your kingdom, crafting new equipment for your critters, performing elaborate rituals to summon vastly stronger versions of normal monsters, fighting in an arena, and gambling your hard-earned loot away to pointy-hatted dwarves. It's probably best to clear your schedule.

A sequel, Siralim 2, entered early access on May 27, 2016 and was released on August 12, 2016, boasting streamlined gameplay, roughly double the roster of monsters, and new features such as a pantheon of gods to jockey for the favor of. Siralim 3 entered early access on May 25 2018, and was released on October 16th, 2018, streamlining and refining the game's formula and balance even further, as well as adding new features such as Monster Breeding and Itherian Realms. The third entry in the series continues the plot established in the second game, with the kingdom of Siralim's monarch (the player character from 2) having gone rogue and attempting to subjugate the entire world, the player being charged with stopping their mad ambitions. A fourth game in the series, Siralim Ultimate, was announced on December 11, 2019.