Film / The Winning of Barbara Worth 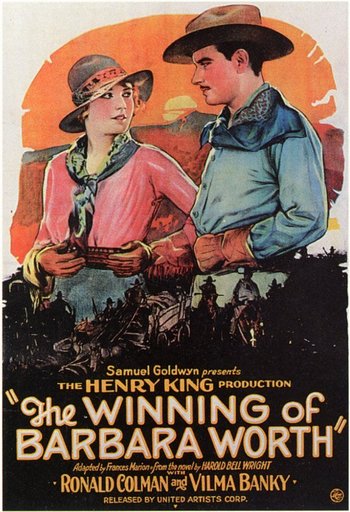 The Winning of Barbara Worth is a 1926 silent Western film directed by Henry King, starring Ronald Colman, Vilma Banky, and Gary Cooper.

Barbara Worth (Banky) is an orphan who was adopted as a child by hardworking pioneer Jefferson Worth, who has come to the deserts of the southwest to make a new life. After a 15-year gap Barbara's father is ready to embark on a grand project to build an irrigation canal from the Colorado River to make the desert bloom. Willard Holmes (Colman), an engineer, arrives in the desert to build the canal, but his unscrupulous boss, Greenfield, has nefarious plans for the canal and the new town of Kingston that springs up alongside it.

Meanwhile, romance blossoms between Willard and Barbara. This displeases Abe Lee (Cooper), a local cowboy who came out to the desert as a boy with Jefferson Worth's party 15 years ago and has loved Barbara ever since.