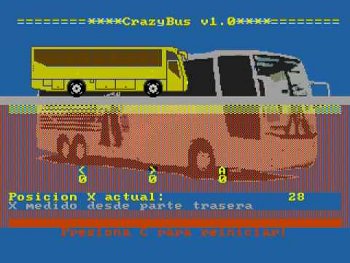 CrazyBus is an unlicensed Venezuelan Sega Genesis tech demo from 2004, created to test out the author's BASIC compiler and sound driver as well as act as a tutorial for said compiler. It's only listed under "video game" for lack of a better category, as the only point of interaction is to move buses left and right. It would be completely unremarkable if it wasn't for the eardrum-bursting, randomly generated soundtrack. More info can be found here.

The Angry Video Game Nerd reviewed this game on Day Three of his "The Twelve Days of Shitsmas" marathon.

Not to be confused with the "Crazy Bus" song from Arthur.