Series / Ready or Not 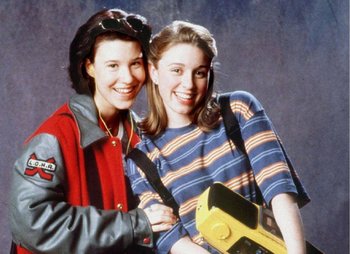 Ready or not! (Can't wait another day!)
A little in shock (What'll your mother say?)
But here we go anyway, now I'll see what you got
Give it your own style, Give me a little smile
Everything's better now, When we go
Ready or Not!
—Opening Theme
Advertisement:

Ready or Not is a Canadian television series that aired on the Showtime Movie Channel from 1993 to 1997, on The Disney Channel from 1996 to 2000, and also on Global Television Network. The show ran for five seasons and had 65 episodes. The show began as a short film titled Thirty-Two Double A, which was eventually turned into a series.

Amanda Zimm (Laura Bertram) and Elizabeth "Busy" Ramone (Lani Billard) are two teenage girls who live in the suburbs of Toronto. Amanda is an only child raised by liberal former hippie parents, while Busy is from a rather traditional Italian-Canadian Catholic family with three older brothers. The girls start the show as sixth graders and continue to the ninth grade.

Towards the end of Ready or Not's original run, Showtime Movie Channel and Disney Channel began airing episodes in the United States.

It is unrelated to the Ready or Not (2019) film, the 2005 sequel to All-American Girl Young Adult novel, or the upcoming video game about a SWAT Team.

Ready or Not provides examples of: