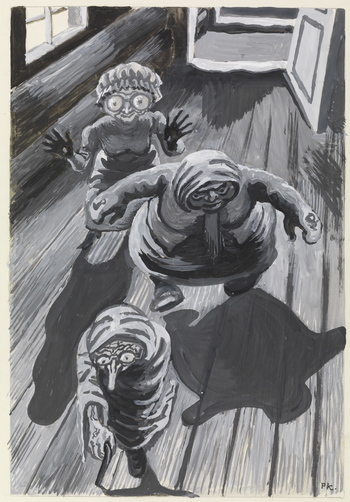 "Well never mind, child," said the old woman, "If you'll call me Aunt on the happiest day of your life, I'll spin this flax for you, and so you may just go away and lie down to sleep."

"The Three Aunts" is a Norwegian Fairy Tale collected by Peter Christen Asbjørnsen and Jorgen Moe.

The queen was pleased with her skill and had her marry the prince because she would not need to hire women to do such work. The three old women came to the wedding feast and are, by daylight, hideously ugly, but the girl called them each Auntie, and they got to sit at the feast. The prince asked why his pretty bride had such ugly aunts, and they explained they had been as pretty as she once, but their endless spinning, weaving and sewing had ruined their looks. The prince promptly forbade her to do these things ever again.