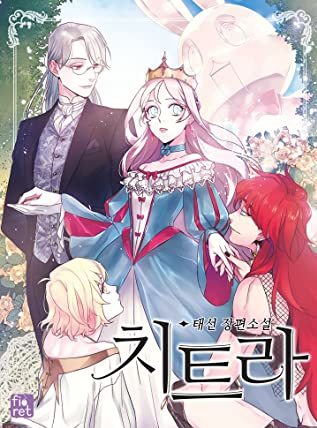 "Let's fill the world with handsome men to benefit all women!" Note Clockwise, from the upper left: Radelk, Chitra, Phobinus, Tyrex, and Tornian
I spent years preparing for the civil service exam. But I can’t believe I died so unfairly…!
Is that so? I was reborn as a beautiful countess. I even got the ability to play games from the God of Beauty.
‘Drawing..?’ Yes, I have the ability to draw for characters.
I have become the apostle of the God of Beauty and benefited the world widely by drawing out ultra rare characters.
[Rare-!]
[Super Duper Ultra Special Rare-!!!]
— Series Tagline
Advertisement:

When a normal 21st century high school girl dies in a terrible accident, the God of Beauty offers her a second chance. The chance to be reborn and serve a higher power. As Chitra Serekino, heir to a dynasty of priest-royalty serving the God of Beauty in a feudal society, our protagonist can have it all — power, riches, and handsome men to tend to her every need. But she's got to put in the work to get those perks! The kingdom our protagonist inherits when she becomes Chitra is falling apart due to mismanagement. Crime is rampant, the armed forces are embezzling funds, and subjects are leaving for greener pastures. Chitra must use the skills she gained on Earth while studying for the civil service exam to whip her kingdom into shape and collect followers for the God of Beauty. And those attractive men she was promised? Because this new world functions like an RPG, the God of Beauty offers her the opportunity to obtain handsome helpers by drawing from from the God's exclusive gacha system.

But this new world isn't all level-ups and lover boys for Chitra. If she wants to complete her quests from the God of Beauty, she'll have to put herself in danger as she builds her kingdom and confronts opponents. And if she fails? She'll die again — and this time there's no +1 extra life.