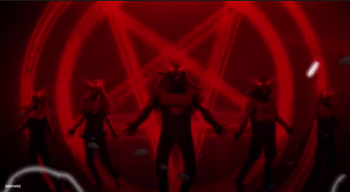 Ye shall be as gods.
Advertisement:

Metalocalypse: The Doomstar Requiem — A Klok Opera is an hour-long (with commercials) Rock Opera based on Metalocalypse; it was written by and heavily performed (the guitar and a vast majority of the vocals) by series creator Brendon Small. It premiered on the 27th of October 2013 on Adult Swim.

Doomstar picks up where the fourth season of Metalocalypse ended: anti-Dethklok group The Revengencers, led by The Masked Metal Assassin and former Dethklok member Magnus Hammersmith, have kidnapped Dethklok's rhythm guitarist Toki Wartooth and album producer Abigail Remeltindrinc. While Dethklok manager Charles Offdensen searches tirelessly for the abductees, the band itself denies having any feelings about their missing friends by partying around the world. Magnus refuses to stand for Charles' interference and Dethklok's apathy, however, so he threatens to murder Abigail and Toki if Dethklok refuses to meet with him and anyone else comes after the Revengencers. With their friend in danger and their fans angered over Toki's conspicuous absence, Dethklok must rise above the selfish, spoiled man-children they are and become the heroes they're destined to be.

Brendon Small released the special's soundtrack via his website on the same day that the episode aired; iTunes and Amazon releases followed a few days later.

This, sadly, would also be the last episode of the series animated. A fifth season was to follow and end the series properly. But disagreements between Brendon and Adult Swim led to a falling out and ultimately lead to the series being canceled. Brendon, however, would finish the series as an audio album, Galaktikon II, which alludes to the characters of the series though doesn't mention them by name. note  Long story short, the album covers the final fight between the band and Mr. Salacia aka the Half-Man who puts his final plan into action to take over the world. The voice from the ocean (implied to be a Goddess or the planet itself) finally make contact with the band to aid them. Murderface is nearly swayed to the Mr. Salacia's side, but ultimately stays with the band when they showcase they won't abandon him. They fight the Half-Man, win albeit not without a lot of destruction, ascend to godhood and set about rebuilding the world. However, in 2021, [adult swim] announced that a feature film that wraps up the story in animated form for good is on the way. So this isn’t the true finale.

NOTE: This is effectively a recap page for a one-hour Wham Episode, so nearly every example could be considered a spoiler. Therefore, all spoilers will be unmarked.

We're givin' these tropes, givin' 'em back to you: