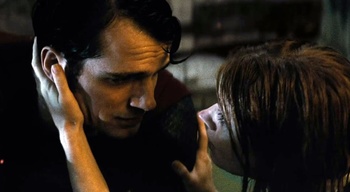 "This is my world... YOU are my world!"
"The fact is, maybe he's not some sort of devil or Jesus character. Maybe he's just a guy trying to do the right thing."
— Vikram Gandhi, clearly understanding Superman's motives
Advertisement:

Batman v Superman: Dawn of Justice may put our heroes through utter hell, but these moments can still convince you that things can get better for them.