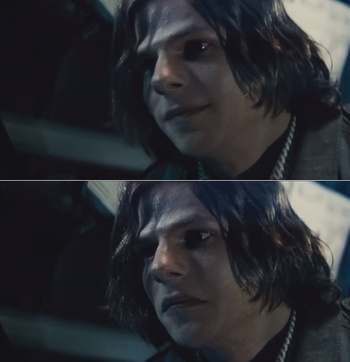 Before: A psychotic man patiently waiting for victory.
After: A psychotic man discovering his impending loss.
"Take a weapon of assassination and call it deterrence. You won't fool a fly or me. I'm not going to drink it."
— Senator June Finch to Lex Luthor, taken literally.
Advertisement:

Despite its somber tone and the tragic moments happening in it, Batman v Superman: Dawn of Justice does have its moments to make you laugh, and not just from the smart-talking Lex.

open/close all folders
Superman
Batman
For such a serious character, Batman sure has a lot of funny moments.
Advertisement:
Wonder Woman
Lex Luthor
Given Lex is a shameless Large Ham, a good chunk of the laughter comes from him.
Alfred
Perry White
Others
Advertisement:
Meta