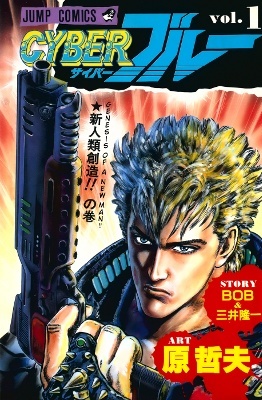 Cyber Blue is a 1988 manga by BOB and Ryuichi Mitsui with artwork by Tetsuo Hara of Fist of the North Star fame. In 2035 on the dystopic Tinos planet, we meet a youth named Blue who is tricked by a police officer into committing murder and is then executed on the spot. However, Blue had just made friends with a 300-years old machine known as Fatso, who decides to revive him as an extraordinary cyborg. By receiving Fatso's knowledge and memories, Blue realizes the roots of the evil plaguing Tinos go much deeper than the crooks who had him killed and sets out to decide the fate of the galaxy itself.
Advertisement:

The series had a 2011 remake called Cyber Blue - Ushinawareta Kodomo-tachi which got a 2012 sequel called X Battlers - Cyber Blue the Last Stand.