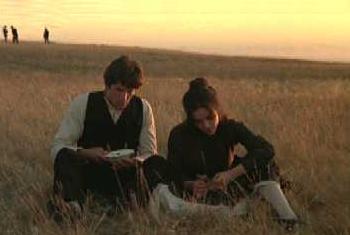 "Nobody's perfect. There was never a perfect person around. You just have half-angel and half-devil in you."
Advertisement:

A 1978 romantic drama by Terrence Malick, in what would be his last feature before a twenty-year absence from filmmaking.

Set in 1916, a steelworker named Billy (Richard Gere) kills a foreman out of anger. Fearing reprisals, he runs away with his sister Linda (Linda Manz) and girlfriend Abby (Brooke Adams). Pretending that Abby is his sister so as to avoid gossip, Billy and his crew hitch a train to the Texas panhandle, where they find work in the wheat fields of a rich but sick farmer (Sam Shepard). When the farmer falls in love with Abby, Billy convinces her to marry him, thinking that he will die within the year and they can inherit his money. Of course, things don't work out quite so well...