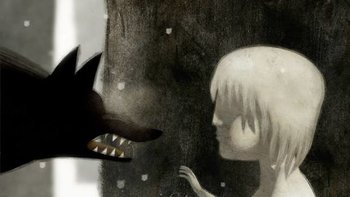 Feral is a 2012 animated short film by Daniel Sousa.

A boy, maybe eight years of age, has grown up wild in the forest. He seems to scavenge off the kills left by a pack of wolves. He is not raised by the wolves; in fact, they are about to eat him when the boy is rescued by a hunter. The hunter takes the boy home, dresses him in human clothes, and sends him off to school. The transition to a civilized world proves difficult for the boy.