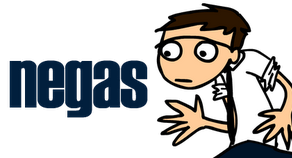 Negas is a YouTube animated comedy Mexican series created by Ricardo Adrián Lozoya (a.k.a RAL), which started on 2009. Negas is RAL's Breakout Character from his original short animations.

Actually, RAL's first animated videos are about a Cheerful Child named Ral, who lives in a Crapsack World version of Mexico together with his best friends Ranito and Keto. It also portrayed Ral's Deadpan Snarker unnamed older brother. It eventually spawned a Spin-Off series: Negas (which centers around Ral's brother, named Negas), and Pinchimono - following the adventures of the Pinchimono, a blob-like creature with Hair-Trigger Temper issues. The plot is a Black Comedy Slice of Life that revolves around Negas, now a neurotic salaryman in his late twenties. And some other short stories.

It is another of the most lucrative YouTube cartoons of Mexico, together with PoGonYuTo and Vete A La Versh. The miniseries can be found on the IrreverenToons Youtube channel

These are currently the Negas cartoons: