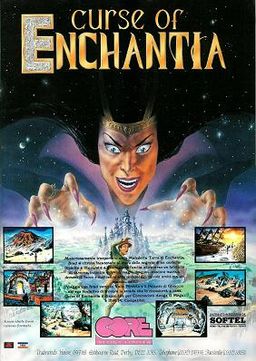 Curse of Enchantia is a classic point-and-click comedy adventure game from Core Design, better known as creators of Tomb Raider. It is probably best remembered for its often strange design ideas and nonsensical puzzles.

The game's story tell of a magical land of Enchantia, where an evil witch queen wants to be stay young for all eternity, but one missing ingredient to cast this spell is a male child from another world. The witch creates a magic portal to the 1990s Earth, spots the young Brad, who just happened to come to play baseball with his sister, and immediately incants the summoning spell. The game begins in a dungeon, from which Brad must escape and then find a way to vanquish the witch and get back to his own dimension.

Curse of Enchantia was supposed to be followed by a sequel in which Brad would return to destroy the rest of the witches, but instead it was made into Universe, a similar game with an entirely unrelated plot.

This game also provides examples of: