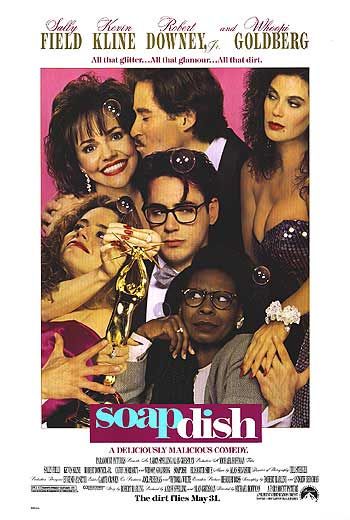 "The Sun Also Sets: a show in which life not only imitated art, it topped it."
— Leeza Gibbons
Advertisement:

Soapdish is a 1991 comedy film which parodies the workings of an American Soap Opera. The real-life problems of the cast are so over the top that the Show Within a Show, The Sun Also Sets, would probably have a better story line if they covered the lives of the cast.

Sally Field plays Celeste Talbert, the neurotic star of the show, who believes her life is meaningless after playing a soap-opera character who suffers all sorts of problems over the more than 20 years she's been on the show (a kind of Shout-Out to All My Children's Susan Lucci who has played the same type of character) while her live-in boyfriend has gone back to his wife in Pittsburgh. She is also loathed by her castmates, most notably Ariel Maloney (Teri Hatcher) and Montana Moorehead (Cathy Moriarty), the latter of whom is scheming to have Celeste fired so she can take her place as the female lead. Celeste does, however, have an ally in Rose Schwartz (Whoopi Goldberg), the head writer of the series.

Montana enlists the help of the producer of The Sun Also Sets, David Seton Barnes (Robert Downey Jr.), promising to sleep with him if he gets rid of Celeste. The captivated David creates a new story line in which Celeste kills a homeless mute in self-defense to make the audience hate her. During this new story line, a very aggressive starlet (Elisabeth Shue) uses every trick she can think of to get on the show, and through an accidental viewing of rushes, she is chosen to be the homeless mute who stabs Celeste. But when Celeste sees the starlet, she recognizes her as her niece, Lori, and she becomes a regular cast member.

Montana and David's next ploy is to find a former castmember, Jeffrey Anderson (Kevin Kline), who was dating Celeste until he was fired 20 years ago when their relationship went sour. He's doing dinner theater in Florida, and David offers him some enticements to come back as his original character (even though said character was decapitated); he leaps at the chance to get revenge on Celeste for his ruined career. Celeste is horrified that Jeffrey is back, and even more horrified that he and Lori seem to be attracted to each other (Jeffrey writes this off as jealousy, Lori as overprotectiveness, but the real reason shocks them both).

Hilarity Ensues as the cast and crew backstab each other in a plot filled with more Soap Opera tropes than most actual soap operas.