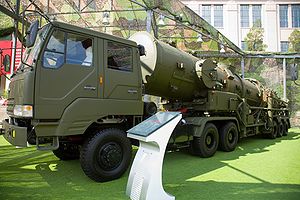 "China got The Bomb, but have no fears
They can't wipe us out for at least five years
Who's next?"
— "Who's Next?", That Was the Year That Was
Advertisement:

The People's Republic of China detonated its first nuclear weapon in 1964. Since the PLA is secretive to say the least, the precise number of nukes that they have is unknown and estimates range from c.150 to c.400. Similarly, the range, throw-weight, number of warheads, and just about everything else published are basically guesswork. As always in these matters, remember that those who know don't talk, and those who talk don't know.

China, like the former USSR, had Reporting Names and DOD designations assigned to its missiles (the DOD's alphanumeric designations following the same pattern as Soviet missiles, but with the prefix "C" added), although these have very largely fallen out of use. They are included for the sake of completeness.

These weapons appear in fiction a small amount- evil Chinese villains don't tend to use nuclear weapons much, but they do sometimes.

If you want to get the idea of how China developed its nuclear weapons, see this clip. [1]

. A nuclear test conducted with The Cavalry. The old-school, horse-riding ones.

The PLAN nuclear submarine corps have an awesome theme song

, though the lyrics have some Unfortunate Implications saying that they are a response and revenge force.

Some other useful notes:

of these in all.