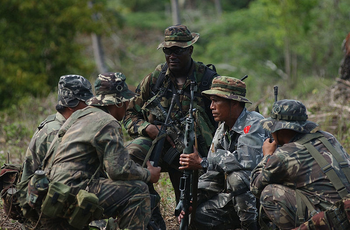 "Give me ten thousand Filipino soldiers and I will conquer the world!"
— General Douglas MacArthur
Advertisement:

The Armed Forces of the Philippines can trace its beginnings to the Katipunan guerrilla forces against Spain in 1896. When they won their independence in 1898, they realized that the Yanks with Tanks were another problem; the Americans defeated the Filipino rebels, finishing the job by 1913 after putting down the last resistance among the Moros in Mindanao. The Philippine military was officially re-established in 1935 when America promised them independence, but when the Japanese came in 1941, they had little weaponry. They had some fierce battles, but the U.S. Army decided that it was Those Wacky Nazis that they had to deal first; eventually, they were forced to surrender and march from Bataan to Tarlac (the infamous Death March).

However, The Remnant of the Philippine Army Took a Level in Badass, forming guerilla movements that held up fierce resistance against the Japanese, who often had difficulties fighting in the tangled jungles of the Philippines. After MacArthur landed in Leyte in 1944, the Filipinos and the Americans fought together in the last battles of the war, during which Manila was burned to the ground due to the refusal of the Japanese to surrender.

The Filipinos later proved their worth in participating in The Korean War with the UN forces. There, Philippine Expeditionary Forces performed relatively well.

The Philippines always gets military aid from the United Statesnote The country has also diversified by acquiring military hardware from other countries like Israel and Singapore while trying to create working indigenous hardware. (including the F-5 Tiger aircraft that would appear in Apocalypse Now), but such aid has always been seen as controversial. The Philippine Senate booted out the U.S. from their Clark and Subic bases at the end of the Cold War due to incidents involving the U.S. military and general ultranationalism by Filipino politicians on both ends of the political spectrum. Even when U.S. troops returned in 2000 for military exercises and to aid Filipinos against the Abu Sayyaf terrorists, and even fight them, there are controversies surrounding U.S. soldiers. One example is the "Nicole Subic rape case

", in which both the media and the Gabriela women's rights movement fired it up, only to be proven by court that Nicole actually wanted to have sex with the US Marine Lance Corporal Daniel Smith, which didn't impress many in the opposition, either, and called this a miscarriage of justice.

These days, though, the Philippine military has seen a decline due to obstructive bureaucrats, corruption in the government, obsolete equipment and little money to replace them (including arms left over from World War II), and being led by Neidermeyers for so long. Not to mention the financial crisis that gripped most of Asia. For example, when the Philippine Air Force wanted new F-16s, they got orders to shoot terrorists until 2012, which proved to be a really stupid idea for many of the PAF people because their existing planes are rusting. This doesn't mean that they have lost their Badass Army status, however. Many of them are quite eager to learn new tactics and finally obtain all the cool gadgets they wish for, if only The Government would actually listen to them. In the meantime, though, they are engaged against communist revolutionaries and Islamic fundamentalists. Increasing the budget is also controversial: trying to transfer to defense funds that are usually meant for health and educationnote The 1987 Constitution mandates that the education department receive the highest budgetary allocation. typically earns the ire of Filipino Leftists, not to mention that the funds are usually tainted by corruption, anyway.

Recently, the Philippine Air Force had bought 8 Polish Sokol helicopters. And the Navy acquired the former US Coast Guard Cutter USCGC Hamilton (now renamed BRP Gregorio del Pilar (PF-15) after the famous and handsome leader who lead the Last Stand on Tirad Pass, ironically against Americans.) arrived in port on the last week of August 2011. Two more similar ships have been acquired by the navy (BRP Ramon Alcaraz (PF-16), formerly USCGC Dallas, and the ex-USCGC Boutwell (now BRP Andres Bonifacio (FF-17)), which was decommissioned on March 2016). On June 1 of the same year, the Navy's largest ship, BRP Tarlac (LD-601) was commissioned along with three ex-Australian landing craft.

The Philippine Air Force and government meanwhile negotiated with the South Koreans to buy twelve FA-50 Golden Eagle supersonic fighter-trainers after it bungled out on the latest US F-16 deal. The PAF apparently chose the FA-50 because, partially it was supersonic, affordable, and at least relatively new. The first two fighters were delivered in late 2015, where they showed up escorting President Benigno Aquino III.

The Philippine Armed Forces consist of an Army, Navy, Air Force, and Marine Corps, the last mentioned being the most badass according to many military analysts. The other three branches would definitely beg to differ, though. (It's less on the fact that the average soldier is poorly trained or under-equipped— most of their old equipment is in perfectly good condition despite their age— and more down to a bureaucratic system inside the military itself.)

By the way, the premier Filipino special forces unit is the 1st Scout Ranger Regiment, trained to fight in jungle combat. It has earned a reputation in Asia as a threat for Communist and separatist guerrillas.

It would also be known that the police in the Philippines were even more militarized than their counterparts in the West; indeed, until 1991, the Philippine Constabulary used to be part of the Armed Forces and were basically light infantry and counterinsurgency specialists. During the American period, they are founded by the Americans to suppress anti-American Philippine Revolutionary Army remnants and the Moro sultanates. In 1991, the Constabulary was merged with the local police to form the Philippine National Police and transferred it to the Interior Department. An attempt to civilianize their police ranks failed due to tradition-officers who were supposed to be called as "Inspectors" were still called "Lieutenants", and many former and active policemen wanted the former military-style ranks to be re-instated. In 2018, army-style ranks were approved once more for the police. The Philippine National Police also has a special forces unit like in the regular Armed Forces, and it is basically an anti-terrorist unit.

Starting in 2021, the Armed Forces of the Philippines is now steadily growing in strength. They now have modernized light tanks, a new batch of firearms (including Rocket Propelled Grenade launchers), attack helicopters, and (for the first time) an MLRS artillery unit.

The Philippine military in fiction: