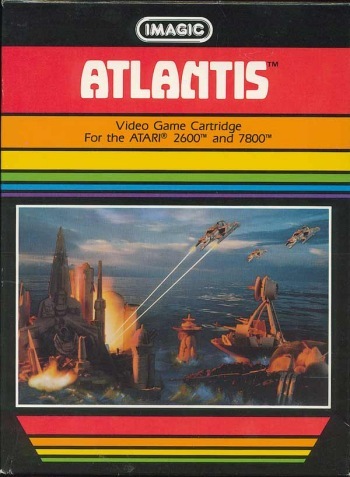 Atlantis is an Atari 2600 game released in 1982 by Imagic, which was also ported to the Atari 8-bit computer family, the Intellivision, the Commodore VIC-20, and the Odyssey². In the game, you play as part of the Atlantis defense command as you try to protect the city from destruction by the invading Gorgon alien fleet, which ships descend lower and lower until they start bombing the surface with a laser beam, destroying whatever installation it touches. You have two cannons on either side of the screen that fire diagonally, plus a cannon in the center that fires straight up. In the Intellivision version you also control a ship which you use to fire at the Gorgons during the night sequences where you can barely see them except through the searchlights.