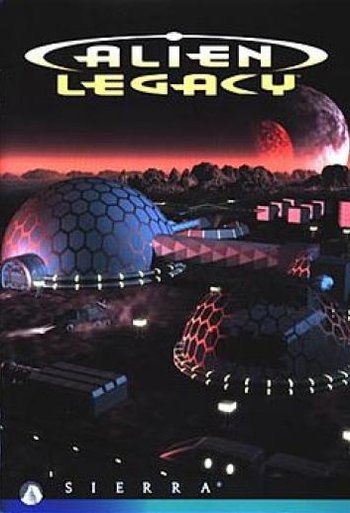 A Strategy/Simulation Game from Ybarra Productions, Inc., released in 1994.
Advertisement:

The player takes on the role of The Captain of the UNS Calypso, a colony ship sent from Earth to the Beta Caeli system in the wake of a Hopeless War between humanity and the Centaurians as a last-ditch effort to ensure that humans survive in some parts of the galaxy. Upon waking up from a Human Popsicle state, you receive messages from Earth sent decades (centuries? millennia?) prior, which inform you of another colony ship, UNS Tantalus, sent to Beta Caeli 16 years later but, thanks to a more efficient engine, set to arrive 21 years prior to the Calypso. Upon arriving to the system, you see that it is remarkably similar to the Solar System. There are also remains of the Tantalus colonists' presence but no colonists themselves.

The game involves colonizing the system and figuring out what happened to the Tantalus and her colonists. This involves sending shuttles to scout planets for resources and viable colony sites, building new colonies, populating them, and constructing buildings necessary to make them self-sufficient. Some colonies cannot be self-sufficient by definition, which includes space stations (which can't mine natural resources) and the Calypso herself, which is a giant, albeit mobile, space station. While only two planets (Rhea and Gaea) can support life, all planets short of gas giants can be colonized. The player can build habitats, power plants, factories, and labs for the colonies. Habitats house and "produce" colonists, power plants allow other buildings to function and produce the "energy" resource. Factories can be set to mining (produces the "industry" resource) or production (builds robots, shuttles, or missiles). Labs generate scientific resources, depending on what each lab is set to produce (mathematics, biology, physics, chemistry, astronomy, electronics, and geology). The main resources in the game are "people", "industry", "energy", and "robots". Scientific resources are used to research new technologies. All but "people" can also be found while exploring planets with shuttles.

The player has several advisors to help you get started and keep you informed about new developments. You also have a PDA that allows you to look up information and keep notes.

The more clues you find as to the fate of the previous colonists, the more you begin to realize you're not alone in this system.