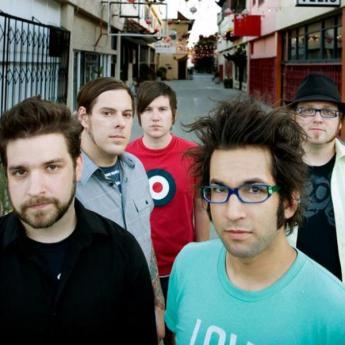 Motion City Soundtrack is a Minneapolis-based pop-punk band, founded in 1997. The band is comprised of founding members Justin Pierre (lead vocals, rhythm guitar), Joshua Cain (lead guitar, backing vocals), as well as Matthew Taylor (bass guitar, backing vocals), Jesse Johnson (synthesizer, keyboard, headbanging), and Claudio Rivera (drums). They have released six albums: I Am the Movie (2002), Commit This to Memory (2005), Even if It Kills Me (2007), and My Dinosaur Life (2010), and Go (2012). Their sixth album, Panic Stations, was released in September of 2015. MCS combines rock music and Moog synthesizers, making for a unique sound. Their songs are also notable for their quirky (and sometimes pottymouthed) lyrics. Word Of God says that the band can be categorized as Scrabble-rock, because of Pierre's love for big words. The group temporarily disbanded in 2016 to spend more time with their families and less time on the road, but announced their reunion in 2019, with a new album slated for January 2020.

These examples freak you out: