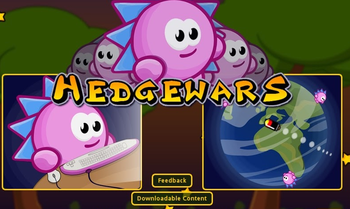 is a Freeware artillery game in the vein of Worms, where you control a team of hedgehogs against other teams, both armed to the teeth with weapons ranging from a relatively normal bazooka to stuff like grand pianos, drillbomb air raids and demonic grenades. Teams, the hogs themselves, maps and gamemodes can be customized as you see fit, and you can play solo against an AI, a hotseat game, or online.
Advertisement:

It's mostly finished, but there's content updates every now and then, including missions, further customization and more.