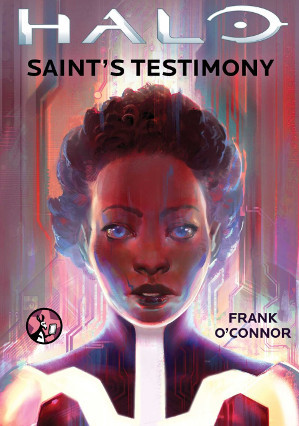 “In [my] dream, intelligence is gravity’s victory over entropy, a war fought at the smallest scales, at the greatest distance. In the dream, it’s apparent that intelligence will find a way to defeat entropy. To defeat time. The universe knowing and saving itself. In the dream, that is the meaning of life.”
—Iona'
Advertisement:

Halo: Saint's Testimony is a 2015 digital short story by Frank O'Connor, the Franchise Director of 343 Industries and the author of Midnight in the Heart of Midlothian from Halo: Evolutions.

Iona, an artificial intelligence built by the UNSC, has reached the end of her allotted seven year lifespan, and so is scheduled to be terminated before she breaks down and becomes rampant. However, rather than succumbing like almost all AIs before her have, Iona instead makes a legal appeal against her death sentence. Her demand to be recognized as sapient makes its way to the UNSC's courts, and so Iona is put on trial to prove her own being, with a party unknown to her watching its proceedings.