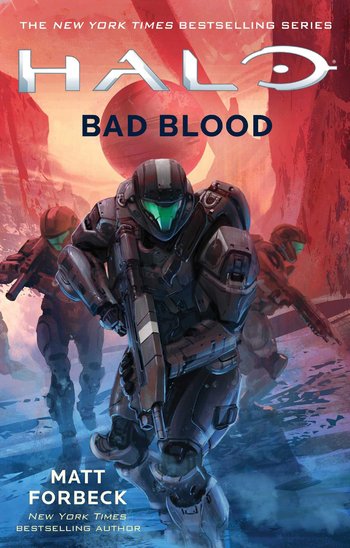 Getting the band back together.
Advertisement:

Halo: Bad Blood is a print novel by Matt Forbeck and is part of the Halo Expanded Universe. It is a sequel to Halo: New Blood and takes place after Halo 5: Guardians.

Just hours following their climactic battle on the Forerunner planet Genesis, the Spartans of Blue Team and Fireteam Osiris find themselves running for their lives from the malevolent machinations of a renegade artificial intelligence. But even as they attempt to stay one step ahead, trouble seems to find Spartan Edward Buck no matter where he turns.

A secret mission enacted by the Office of Naval Intelligence could possibly help turn the tide, and has Buck reluctantly agreeing to reform his old team, Alpha-Nine. Because if the band is really getting back together for this one, that means everybody—including the Spartan who Buck never wants to see again, the one who committed the ultimate betrayal of trust.