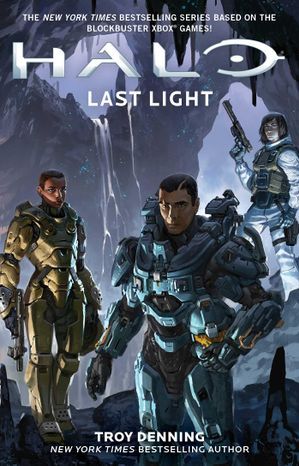 Halo: Last Light is a 2015 novel by Troy Denning set in the Halo series, which follows the Spartan squads Blue Team and Team Saber on a mission to a distant colony.

It is July 2553, four months after the end of the devastating Human-Covenant War. Now lacking a common enemy, the United Nations Space Command and colonies sympathetic to the Insurrection have started to grow hostile to each other again. These tensions flare on the independent colony of Gao, where mysterious murders have been occurring in its Montero Caves shortly before the UNSC sends its forces, including a team of Spartans, to lock down the site. Demanding their own investigation, Gao's government sends special inspector Veta Lopis to solve the murders, though the UNSC insist that the Spartans "supervise" her. But the Spartans have their own mission, and Veta suspects they may have had the means to carry out these crimes...

It is followed by a sequel, Halo: Retribution.