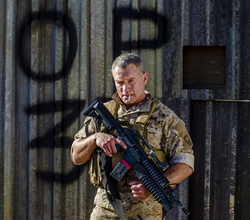 Outpost 37 (aka Alien Outpost) is a 2014 mockumentary war movie. In 2021 the Earth was invaded by by the alien "Heavies", who were fought off-planet, but left behind thousands of their soldiers. The setting is a DMZ between Pakistan and Afghanistan, where the USDF (United Space Defense Force) has maintained an outpost for a decade after the invasion. In 2033 a camera crew documents three rookies as they join the outpost and the eventual conflict with Heavy remnants.

Interspersed with the jitter cam and spy cam footage are interviews with the soldiers and TV news broadcasts to uphold the documentary format. A few thermal and night-vision camera shots also appear, unsurprisingly as it's in the future when the cameras should be less expensive.