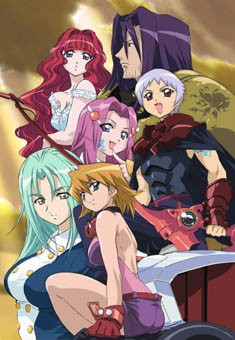 "A great war took place in the 20th century. It was a full-blown war between humans and monsters. Words alone could not describe the violent struggle that ensued. And in the end, the monsters were victorious. Days passed and a new century began. And slowly, people began to forget that melody."
— Melody of Oblivion
Advertisement:

Many years ago, there was a war between the humans and the Monsters. The Warriors of Melos fought valiantly, but in the end, the Monsters won, and rule from the shadows. The children of the current era are completely ignorant of the battles of the past, even as children mysteriously disappear, sacrifices to placate their Monster overlords.

Melody of Oblivion chronicles the journey of Bocca and his allies as they fight Monsters and, more often, the humans of the Monster Union, searching for the truth behind the phantom girl called 'Melody of Oblivion' whom only Warriors of Melos can see.

An extremely surreal show full of flashbacks and flashes to symbolic portrayals of the action, strong themes of the show are the loose line between reality and fantasy and rebellion against society's mores.

A 24-episode anime series by JC Staff (with help from Studio Gainax) that originally aired in 2004. There is also a six-volume manga adaptation produced by Kadokawa Comics.