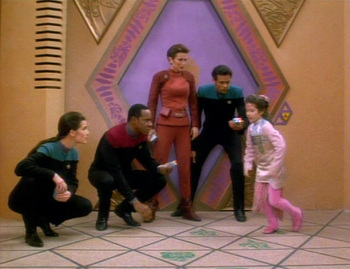 "Allamaraine, count to four, Allamaraine, then three more..."
It's First Contact time. A Gamma Quadrant species known as the Wadi are due aboard DS9. And when they arrive... they immediately ask where the games are.
Advertisement:

The Wadi love them some games. In fact, it's all they seem interested in doing; and much to Quark's (and Sisko's) annoyance, they learn quickly and like playing for really long stretches. Sisko heads for bed after six hours of the Wadi playing Dabo, and Quark is left to deal with loitering winners.

Naturally, Quark decides to end their winning streak the Ferengi way: cheating. And when the Wadi find out, they aren't happy. They bear down on Quark and force him to play a fair game from their own society: Chula.

After the board is deployed, Sisko, Bashir, Kira and Dax find themselves in some mysterious maze-like structure. It turns out that they're the game pieces for Quark's game of Chula, only he doesn't know it yet and simply sees this as another gambling man's game. With each turn, the party is presented with some sort of riddle or puzzle, and their success or failure determines what Quark wins.

The absence of the senior staff eventually reaches Odo, who goes snooping aboard the Wadi ship. After discovering a blinding light behind a door, he leaps in... and lands at Quark's.

Quark finally realizes his pieces are the missing officers and has a suitable Oh, Crap! reaction. He starts playing it safe, but Bashir still gets eliminated from the game to an uncertain fate. A later move means Quark is forced to choose a piece to sacrifice. Realizing his choice would mean killing a crew member, Quark breaks down and grovels, begging not to be forced to sacrifice them.

The Wadi oblige... and have the game choose a piece to sacrifice at random.

Nearing the end of the game, Dax is injured, and Sisko and Kira refuse to leave her behind. As the cave they're in falls apart around them, they tumble into a deep crevice... and pop back at Quark's bar, along with Bashir, no worse for the wear.

It really was just a game. Sisko and crew were never in any real danger. Sisko is bitterly angry, but the Wadi just laugh him off and leave DS9.