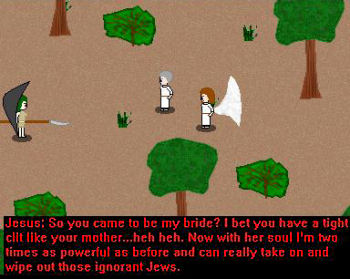 This ain't your Sunday school teacher's Jesus.
Some Xians have played this game and loved it admitting it challenged their beliefs and for some it made them see things differently/learn. I take plenty of ish from the old Polytheistic Jewish writtings....yes you heard me right...POLYTHEISTIC!!
— Sean J. Nichols

The Last Resurrection is an independently developed Windows game from 2002 made by Sean J. Nichols, released in four chapters. The most notable thing about it is its massively anti-Christian slant, with Jesus as the main villain. Part one is set during the first century CE and details Christ's first plan for world domination; part two is set in the Middle Ages; part three is set in 19th-century Transylvania and reveals that Dracula was working for Jesus, and part four is set during World War II, in which Jesus pals about with Hitler. The main characters are a range of succubi and vampires.