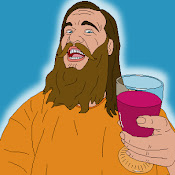 is a maker of YouTube Poop who has been active since 2015. Notable for making many YTPs of Veggietales and ushering in an era full of poops of said source.

This Pooper's YTPs provide examples of: