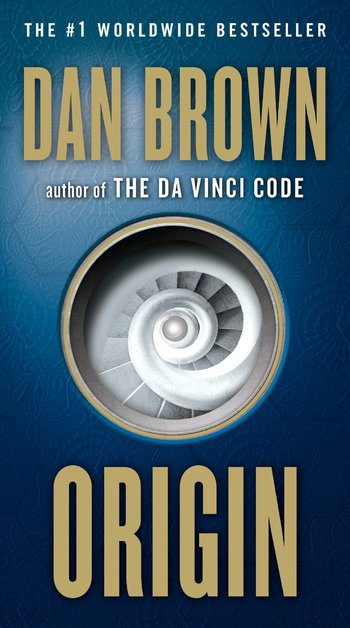 Where do we come from? Where are we going?
—The Driving Question

The 7th novel by Dan Brown and his 5th featuring Harvard Art History note He was known as a "symbology" professor in previous novels, but this was retconned, probably because the term was made up by Brown and the closest real-life thing, Semiology, isn't a well-known term Professor Robert Langdon being dragged into an adventure in Europe; published in 2017.

It begins with Langdon going to the Guggenheim Museum in Bilbao, Spain, to attend a presentation by Edmund Kirsch, Langdon's ex-student and now friend. Kirsch is both loved for being the most advanced technological innovator on earth, and hated for being a smug and arrogant atheist. Kirsch is very mysterious about what the presentation exactly is about, but tells Langdon beforehand that he will reveal a recent discovery so earth-shattering that it will mean the end of religion, and that the only other people who know of it are a bishop, a rabbi and an imam he consulted three days prior.

But before Kirsch can make his big reveal, he is shot to death on-stage, which also is broadcast by a live stream on the internet. Langdon immediately teams up with Ambra Vidal, the Guggenheim museum director who's also Edmunds friend and Spain's crown prince's fiancee. They decide to not cooperate with the police but flee to Kirsch' house in Barcelona in an effort to find out Kirsch' password to his phone, which would give them access to what Kirsch had discovered. They are assisted by "Winston", an artificial intelligence created by Kirsch and to them taking on the form of (the voice of) an older British man.

Kirsch' killer is quickly identified to be ex-Navy Admiral Avila, who seems to be a religious extremist with connections to bishop Valdespino, who himself is closely tied to the Spanish Royal family AND is the one Kirsch discussed his discovery with days before his death. When the imam and the rabbi who met with Kirsch are quickly also found to be murdered, Valdespino seems to be involved, and worse, also Ambra's own fiance, the prince, seems involved.

As with other Langdon books, Langdon and his attractive female companion spend the rest of the book outrunning both the bad guys and the authorities, trusting no one, trying to solve the murder themselves while proving their own innocence, and, most importantly, solving mysteries and conspiracies.