Film / The Decline of Western Civilization 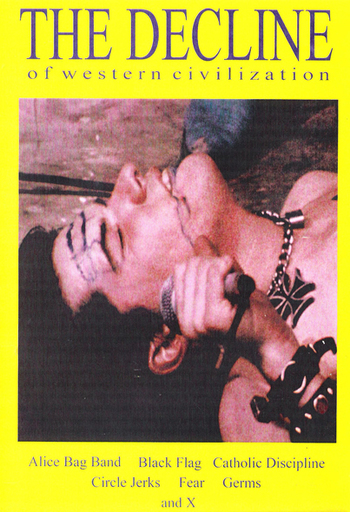 The Decline of Western Civilization is a 1981 film directed by Penelope Spheeris.

It is a documentary of the Los Angeles punk rock scene in 1979-80. Spheeris interviewed several bands that were well known among punk rock fans of the era, including Alice Bag Band, Black Flag, Catholic Discipline, Circle Jerks, Fear, X, and The Germs. Also interviewed are other people involved with punk rock in L.A., like club owners, fans, the staff of alternative music magazine Slash, and the put-upon manager of The Germs. The film also features extensive footage of all the above bands in concert.

Darby Crash, lead singer of The Germs, killed himself via intentional heroin overdose before this film was released. Pat Smear, referred to only as "Pat" and a guitarist for The Germs, hit it big nearly 15 years after the events of this movie when he became a touring/live guitarist for Nirvana.