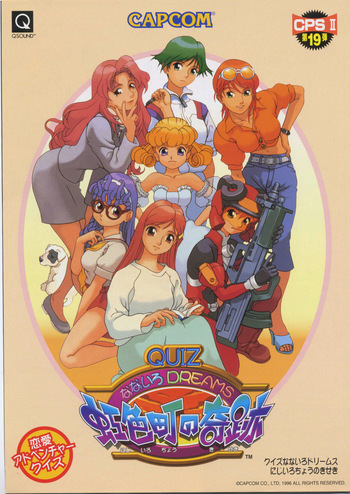 Each Colour A Girl!
Advertisement:

The night of March 31, the to be named hero of the plot was sheepeeshly glimpsing at the stars, yet some of them, being the eight meteors hostering the Rainbow Stones, precipitated on Earth.

Among the eight stones, one has stuck the protagonist and a palm-sized, benevolent pixie pops out of it, explaining the main character about the Rainbow Gems and their sealing powers.

They happened to be keys to seal the evil Godiva (arcade name)/Belbeebub (console name) from coming to Earth through a portal between Earth itself and Makai, the demon world.

Now the hero has to look for the Rainbow Gems, attempt to re-seal Devil Lord Godiva/Belzeebub that would be resurrected after the six months he has to try to woo on seven (nine in the console version) girls.

Will he achieve it? It is up to you, the player, the one to literally handle the wheel of fate and chance he can move the character with as time goes by.

A very interesting mixing of quiz game and dating sim game, it offers almost 6000 different questions on topics you can choose after you meet a girl (they all differ in relation to the girl you meet) and sadly never officially/fan translated, making it impossible to complete straightly for anyone that is not a Japanese speaker without savestates and/or trial&error or excellent photographic memory.

The game also sports a Drama CD, with the Japanese voice actors all retaking their roles as the characters in the game. In addition, one of its characters, Saki Omokane, would reappear a few times in Capcom's crossover fighting games, first as an Assist Character in Marvel vs. Capcom: Clash of Super Heroes, and as a playable character in Tatsunoko vs. Capcom.