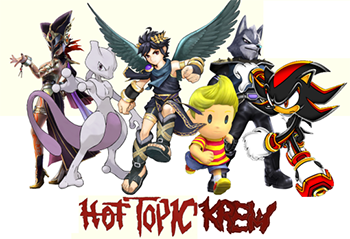 is a Super Smash Bros. fanfic created by an anonymous tumblr user, otherwise dubbed as Original HTK Author by the moderator of SSBFanfiction and MerchantAnna

on FanFiction.Net​ and Archive of Our Own. It was first submitted on the tumblr blog SuperSmashBrothersFanfiction

on December 24, 2014 followed by a Christmas special the next day. The story was originally intended to be done in a form of playing popcorn, allowing various anonymous users to contribute to each chapter, or "chaptar" as they're called. However, by January 5, 2015, the anon decided just to take the liberty of writing it out completely (or so they claim).
Advertisement:

During the same month, Anna's partner in crime, GeneralDarkPit

, porting the story on Fanfiction.net and Archive of Our Own with Anna's permission

. Later on, they started contributing to the plot as well, thus making them an co-author of the story.

During the middle of January, the HTK boomed in sudden popularity, leading to other The Hot Topic Krew spin-offs and other fan-related works to rise. The HTK also obtained a seal of approval

While one would think The Hot Topic Krew is the My Immortal of Super Smash Brothers, it's really not. Contrary to popular belief, despite both fanfics centering around Goths, both are completely different in terms of their premise.

In September 2017, MerchantAnna recently confirmed this fic to be a parody of almost every Troll Fic trope imaginable. In October they posted the first chapter of a sequel titled ''In the Eye of the Storm''

. Since it hasn’t been updated in years, it may be discontinued.

The story focuses on the aforementioned Hot Topic Krew, a club of goths formed by Dark Pit and Lucas (who happen to be lovers) because the local Hot Topic has been stocked with fandom shirts, boy band merchandise, and stuff that just all-around isn't edgy anymore. And also using the word 'an' instead of 'a' even when the next word begins with a consonant. However, the story gets a lot weirder than its premise.

Soon, Yoshi, a villain who despises Dark Pit and Lucas, turns out to have been the one that remodeled their beautiful Hot Topic, and wants to make sure that he can't be stopped. He forms a new team to battle the Krew, known as the Cute Toot House. The Krew is able to beat the House at first, but Yoshi still has a lot under his sleeve, and may not be the source of it at all...

And everything just gets wilder from there.