Literature / The Fangs of K'aath 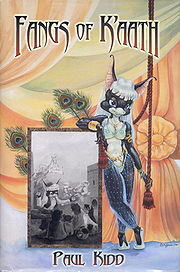 Yes, she's a Bat and why she doesn't have wings is one of her stories.
The Fangs of K'aath is a furry novel series written by Paul Kidd and is one of the most hailed books of its specific genre.
Advertisement:

The series takes place in the metropolitan Islamic kingdom of Osra where a young bat named Sandhri lives a marginal living as a street storyteller after her homelands and family were destroyed by the Shah's forces.

She meets and falls in love with the bookish scholar Raschid and has several adventures with him in the capital city of Sath. Later to her outrage, he turns out to be Prince Raschid Al Dinaq, second son to the Shah himself, and she rejects him. Despite secret forces determined to keep them apart, Sandhri later forgives the heartbroken Prince and, with a little help of Itbit the clever mouse harem servant girl, finagles her way into the royal court to become his concubine although the Shah refuses to allow them to marry. Meanwhile, a mouse slave dancer named Yarïm struggles to keep her virtue in the royal harem even as the Prince and storyteller hope to help her.

However, the Prince is assigned to deal with nomadic raiders in the desert and Sandhri insists on accompanying him, expertly helping him organize the expedition to that end. On that excursion is danger and betrayal as the heroes find enemies and friends they never expected and return in well earned triumph. However, Sandhri, Raschid and Yarïm unlocked the final puzzle for a far more diabolical scheme that holds the world the balance.

The second book is Guardians of Light with the heroes now undisputed rulers of the reformed Osra, as a softspoken buddist Panda scholar, Tsau-yi Meng, comes to find himself joining the court. Together, Raschid's court is put to the ultimate test as a sinister warlord named Tsu-Khan threatens the land and Osra must rise to meet this challenge.