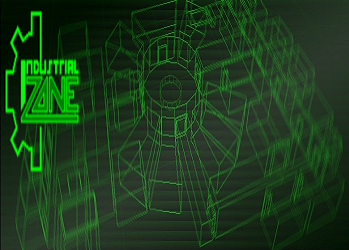 "Of course, it's all just an excuse to get us covered in as much gunge as possible."
— Gwen, the excited-looking pink dragon girl, Industrial Zone, Episode 1
Advertisement:

Industrial Zone is a long running furry Web Serial Novel series written by a user known as Iron-K; it's been published on a few websites over the years, but the main host for all the stories is now here

. The main series is based on adventure-based game shows that were popular in the late 1980s and early 1990s, starring furry characters instead of humans. Each story takes the form of an episode of a TV show called (unsurprisingly) Industrial Zone. It's become the norm for each story to be released over the course of about a year in six instalments.

Each episode stars four college-age furry contestants who are led around a huge immersive TV studio by the vulpine presenter, Alex. The set is divided into four main areas in a setup based loosely on The Crystal Maze. Each instalment covers one of the four areas, where the contestants normally take it in turns to complete a particular task in order to earn points. Failure to complete the task usually results in the furry character being engulfed in huge quantities of gunge, which is the other main element of the show.

Strictly speaking, being slimed should be treated as a punishment, but although all the characters react slightly differently, nobody seems to hate being gunged on the show, although given that all the characters all know what they're getting into this is hardly surprising.

For this reason, the stories are very popular both with the furry fandom and the Wet and Messy community, and yet have managed to remain lighthearted despite these two fetishes having a very high proportion of trolling within their communities. It's also generally free of adult material (again surprising, given the fetishes involved), although there have been a few exceptions in the main series and spinoff stories covering the lives of individual contestants outside the show are often more adult in nature.

As of 2011, there have been seven stories. The first four stories are set during episodes of the show's second season where the Industrial Zone was a giant space station and the contestants were trying to shut down a renegade computer. The most recent three have been set during the third season, where the space station has been replaced with a giant underwater lab. The undersea setting is largely just an excuse to increase the amount of gunge that gets thrown around on the show to a ridiculous quantity, and in one episode they actually lampshade how much time is spent making the slime in the first place. The show's own story has changed to purifying some "transformed water", though as with the second season, the story is deliberately pretty much irrelevant to the contestants who focus on the game itself and getting slimed.

In recent episodes, an additional instalment has been inserted between rounds 2 and 3, where a guest character is interviewed by Alex in a gunge tank. The guest then tries to avoid getting slimed (with obvious results).

Instalments are quite long (usually around 20,000 words each), so the publishing schedule is quite irregular, but the stories have a loyal following and it’s managed to keep going despite its distinctly niche appeal.