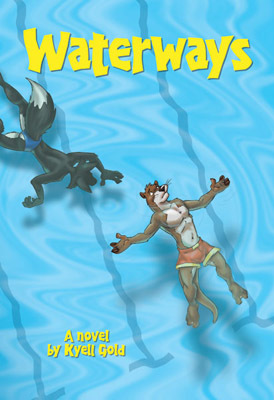 Samaki (left) and Kory (right).
Waterways is an anthropomorphic novel by Kyell Gold, with cover and interior illustrations by Cooner

. Taking place in the Forester Universe, the story focuses on Kory, an otter, and Samaki, a black-furred red fox, fumbling through their friendship and more throughout their last years in high school. However, when Kory starts to have feelings for the fox, his entire world collapses into itself, and he, with the help of his brother Nick, friend Malaya, and Father Joe, needs to pull himself out of the rapids into the new waterways that make up his life.

There is an upcoming short film adaptation of Waterways by the same name. Waterways