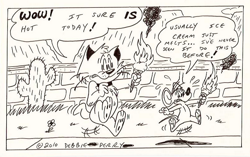 Wouldn't they burst into flames, too?
Fluffy and Mervin

is a gag-three-times-a-week webcomic about the childlike, mischievous cat Fluffy and the self-centered, conceited mouse Mervin. Honestly, the species of the characters isn't that important (they don't spend a lot of time chasing each other).

This webcomic provieds examples of: