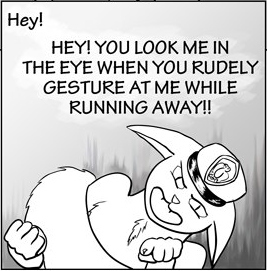 I don't care if it's physically impossible!
Darko: And how do you know that there won't be any tanks or armed guards?
That there won't be cameras in every corner and undercover agents around every bend? Tripwires around the perimeter and explosives in every odd cake!?
Petric: Ummm.... Because et's a fancy drezz ball?

is a Funny Animal comic/webcomic that takes place in a world dominated by cute, (mostly) fury animals with severe mental deficiencies: the most common being a lack of commonsense. The plot consists mostly of the characters being beaten to death with a never-ending hail storm of idiot balls while taking a walk through an entire forest of idiot trees on their way to pick up some delicious Schmuck Bait from the store.

The main character is Brainiac, a large, happy blue dog who also seems to be the least intelligent creature in the entire world.

Whether or not it should be labeled a comic or webcomic is debated as both versions were released at the same time, probably in an attempt to drive us insane while trying to categorize it. A new, free, issue is released in print every month, while the webcomic version is updated once a week.

Oh and did we mention that the story takes place in Suckerville, Maine?