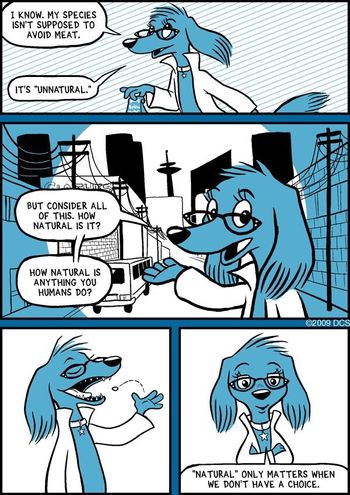 was a webcomic created by Dana Simpson, the author of Ozy and Millie and Phoebe and Her Unicorn.

It is the memoir of a blue-furred dog named Raine. In the present, she's an anthropomorphic dog who can mingle with humans as well as other animals. But it wasn't always that way, and it is suggested that she helped make it that way.

She started out an almost ordinary puppy. But she loved her first owner so much that she learned to speak and read English (among other things) to be like him. He could forget she was a dog — which proved to be their undoing.

She was spayed because she "molested" her family's son, and sent to the suburbs. The new owners kept her tied to a tree without human attention. This drove her crazy (explaining a lot about the "present day" strips), so one day, she took off her collar...

A first attempt at starting the comic began in 2009. Reactions varied from complete apathy to utter condemnation. The first bubbles of discontent toward the comic occured when Simpson published a non-story comic where Raine Broke The Fourth Wall to talk about "red dogs" and "blue dogs", not so subtly taking aim at Red State/Blue State politics, specifically at the Republicans.

Fans and non-fans alike were not pleased with Simpson's allegory, and even if you didn't find the idea of doing a comic where a major plot point involves a dog making out with a young boy to be weird, some people couldn't get past Simpson's left-wing politics, which had already started to grate on some fans due to I Drew This, although Ozy and Millie tended to avoid this because it wasn't really a politically-themed comic.

In 2011, she decided to restart the comic, with the few pages she happened to post went past Darker and Edgier by having Raine Dog apparently being assassinated (although it's an Ambiguous Situation), leaving the rest of the story to be told in flashback. Putting aside that she opened on a dark note, the new opening looks very much like Raine was being set up as a Martin Luther King of her universe. However, after posting only one new page, Simpson abandoned Raine Dog altogether to concentrate on the project that became Phoebe and Her Unicorn. In 2016, Simpson wrote a blog post

in which she frankly discusses Raine Dog and why she gave it up.

Compare with Steve Gallacci's Dog House, which has a somewhat similar premise.