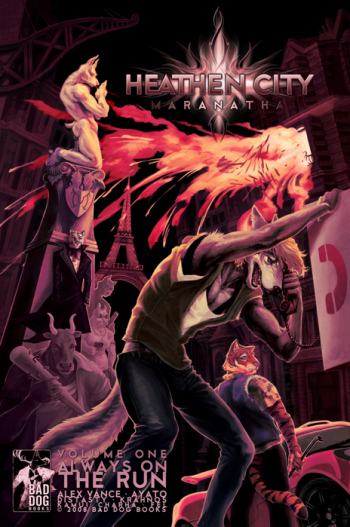 is a 2008 furry homoerotic noir thriller series of graphic novels by by Alex Vance. (Not that Vance, mind you) It originally started between 2004 and 2006 as an unfinished novel called Maranatha

which takes place years before Heathen City itself.
Advertisement:

Maranatha takes place in the fictional decaying city of Maranatha, Florida, on the equally fictional Blood Bay Peninsula. The story centers around its main characters Owen Zelazny and Q. I. Malloy. Owen, an American wolf, is a self-employed male hustler constantly turning tricks. Malloy, an English doberman, is a petty thief and drug dealer. Owen and Malloy are childhood friends. They are emotionally and sexually intimate, but are Just Friends With Benefits without any romantic layer.

Heathen City takes place some years in the future after the unfinished Maranatha story. In its backstory, Maranatha was abruptly destroyed in 2005 when its entire city center collapsed into a giant sinkhole at least eight square miles in size. The initial survivors couldn't be rescued because a lethal dust billowed up from the collapse crater, killing the majority of people who came in contact with it.

In both stories, Owen and Malloy are thrust into the role of Action Heroes, with much badassery ensuing.

Now has a theme song

These works bear examples of the following tropes: